The anticipated move to Schwab is scheduled to occur Labor Day Weekend 2023.

Communications from Schwab about the conversion will be forthcoming starting next Spring.

When clients talk to us about ESG/Socially Conscious Investing, it is usually followed by “and I don’t want fossil fuel meaning oil companies.”

The problem is this area is not black and white.

In Europe, investment in oil and gas peaked in 2014. Since then, many of the oil fields are being reconstituted into wind farms. The skills to manage oil platforms is similar to wind platforms and are easily transferable.

It seems the oil companies have seen the writing on the wall. Add in tax incentives and they have the resources to invest in clean energy products – especially wind farms that would use a skill set already part of their companies.

Europe is ahead of the U.S. in clean energy. According to a Barron’s article titled “Buy BP and Exxon Stock. They Have a Surprisingly Green Future,” Western Europe anticipates 60% of their energy will be from renewable sources by 2030.

So, the clear delineation of wanting no fossil fuel stocks as part of ESG investing has become very gray.

We believe part of your retirement planning should include any home projects you are considering. Our experience shows it is better to execute the home projects BEFORE you stop working rather than after.

While the project is occurring, you continue to work. Maybe you don’t save as much because you have to pay for the project, you also aren’t withdrawing from savings. It is unanimous from our clients that no project comes in as budgeted – rather the costs are usually higher.

Once you have stopped working and use savings for projects, you can’t reimburse your account. And if the market is declining, your accounts are impacted even further. While this may not make a significant difference in the short-term, there is less money growing for your later years. The funds can’t be replenished because you’ve stopped working.

Next time we update your plan, please let us know of any projects you would like to include.

It is hard to escape so much negativity in the media. Hence, our laughing out loud at the above cartoon though it has an element of truth. Sometimes you just have to stop watching/listening to the news.

Capital Group (American Funds) sent a newsletter recalling a speech made by Jim Fullerton, former chairman in November 1974, about the then-extended bear market with some historical perspective as well as “a dose of optimism when it was in short supply.”

He said, “Courage! We have been here before.” Within Capital, it is known as the Fullerton letter. Over the decades, the financial markets tend to anticipate a better future even in the midst of negativity. Below is a graph from their newsletter. 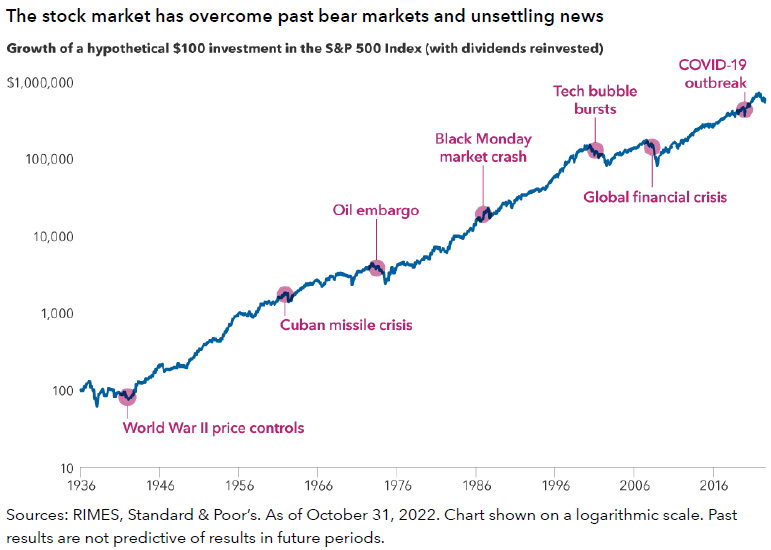 Many people today have not experienced inflation in their lifetimes. Add to that global unrest, lingering pandemic issues and a bear market, it is no wonder that depression, anxiety, and pessimism exists.

While it is true to some degree “this time is different,” it is also true there is some commonality to other bear markets. When people see all the uncertainties, it is hard to embrace the idea of continued investing, instead thinking that waiting for the problems to recede would be a “better time.” But the stock market is a leading indicator – meaning it anticipates the future reflecting its ability to bounce back.

The reality is that U.S. corporations survive, the government continues, the short-term future is unpredictable, prices are down, and as Warren Buffet says, “Be greedy when others are fearful.”

We continue to rebalance your portfolios, buying/selling as your asset allocation dictates, regardless of the market. However, as the cartoon says, sometimes it is a good idea to unplug which goes for the staff of Financial Connections as well. J

You may have seen a number of articles that discuss generating tax losses before year-end to be used for income tax purposes. It is something advisors do when there is a substantial market decline. As such, we have done so in 2022.

Tax losses offset investment gains. They also are available for future years until they are “used up” so you don’t lose them if not used in one tax year. You can deduct as much as $3,000 in capital losses per tax year.

A tax loss is not necessarily an investment loss. Each security has its own numbers for calculating. Below is an example of a tax loss but investment gain.

No Hidden Costs. No Referral Fees. No Commissions.

As a fiduciary, we put our clients' interests first. Our compensation comes exclusively from you. If we don't directly provide a particular service, we can serve as a resource for referrals to other professionals.

You are leaving www.FinancialConnections.com and will be automatically redirected to the link you clicked.

Changed your mind? Go back to www.FinancialConnections.com

We use cookies on our website to give you the most relevant experience by remembering your preferences and repeat visits. By clicking “Accept”, you consent to the use of all the cookies.
Cookie SettingsAccept
Manage consent

This website uses cookies to improve your experience while you navigate through the website. Out of these, the cookies that are categorized as necessary are stored on your browser as they are essential for the working of basic functionalities of the website. We also use third-party cookies that help us analyze and understand how you use this website. These cookies will be stored in your browser only with your consent. You also have the option to opt-out of these cookies. But opting out of some of these cookies may affect your browsing experience.
Necessary Always Enabled
Necessary cookies are absolutely essential for the website to function properly. These cookies ensure basic functionalities and security features of the website, anonymously.
Functional
Functional cookies help to perform certain functionalities like sharing the content of the website on social media platforms, collect feedbacks, and other third-party features.
Performance
Performance cookies are used to understand and analyze the key performance indexes of the website which helps in delivering a better user experience for the visitors.
Analytics
Analytical cookies are used to understand how visitors interact with the website. These cookies help provide information on metrics the number of visitors, bounce rate, traffic source, etc.
Advertisement
Advertisement cookies are used to provide visitors with relevant ads and marketing campaigns. These cookies track visitors across websites and collect information to provide customized ads.
Others
Other uncategorized cookies are those that are being analyzed and have not been classified into a category as yet.
SAVE & ACCEPT